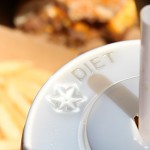 “I’ll take a large Big Mac meal and a diet soda.” Sound familiar? Besides that Big Mac, (which has 704 calories- 43 grams of fat- 17 grams of saturated fat- and almost half the sodium and cholesterol you need in just one day) your fake sugar substitute-zero calorie carbonated soft drink you order could be packing you on some pounds too. Endless studies have suggested that drinking just two or more diet sodas a day, overtime, can be one of the reasons why our waist circumference is getting bigger. Up to 6 times bigger over the next 10 years! When saccharin, sucralose, aspartame, and/or acesulfame-K touch your taste buds it signal to your brain that food is coming in- but the body doesn’t get the energy it’s expecting. This leads your body feeling tricked and deprived, as a result possibly leading you to over eat. This is where the weight loss debate begins.

Artificial sweeteners can be 300-12,000 times sweeter than regular sugar, and research suggests that the tastes of sweeteners are mildly addictive – leaving you wanting more every time. Diet soda may be free of calories, but not consequences. Too much consumption of this bubbly sweetness, and you could turn this guilty pleasure into a host of chronic illnesses. Illnesses like high blood pressure, seizures, headaches, stroke, heart disease, vascular disorders, brain disorders, and diabetes. Consuming two diet beverages a day can reek havoc on your blood sugar by spiking it too high, too quick — raising blood glucose levels and exposing you potentially to diabetes. I’ve read equally as many studies done on lab rats as I’ve read on humans over the past 15 years regarding these sugar substitute effects. The results (and outcome) we’re identically the same. In almost all studies, those exposed to fake sugar sweeteners like saccharin and aspartame, ate at least 80% more than the participates who were given natural sugar. That’s a huge difference!

On the other hand, lets say you’re a pretty healthy eater and a moderate exerciser who’s used to drinking three to four regular sugary soft drinks a day. You begin to notice over the past year or so that the number on the scale has been sneaking up on you- slowly and surely. In my opinion, switching to diet soda to help assist in weight loss would be a great idea, as long as it is in moderation. Water should always be your number one choice, boring I know, but our bodies can not function properly without enough fresh H2O flooding through it. Diet soda itself is not going to make you fat, but if you do have the bad habit of picking up the calorie slack in other places, you might want to reconsider drinking soda at all. I’ve always firmly believed that cutting out all sodas is the best possible scenario in kick-starting any weight loss plan.

The best way to maintain a healthy weight is by balancing calories consumed with calories burned. There’s no such thing as one quick fix diet that can last forever, but there are plenty of small adjustments you can make now to create a healthier lifestyle and reach the weight loss number you’re looking for.

So, are you guilty of that diet soda splurge? I want to hear about it! Leave a comment below. 🙂

Posted in All About Sugars, Weight Loss and tagged diet, sugar, weight loss